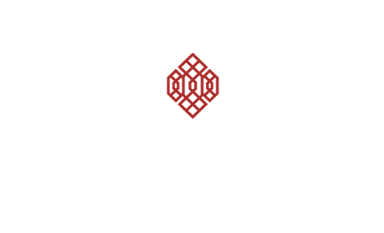 “This will be a place of congregation, of order, of peace, of prayer, of hope, of humility, and of brotherhood"

The Ismaili Centre, Vancouver was opened on August 23, 1985 by then Prime Minister of Canada Brian Mulroney in the presence of Mawlana Hazar Imam, the Premier of British Columbia Bill Bennett, government ministers, diplomats, and leaders of the Ismaili community from around the world.

Three Ismaili Centres are currently being planned and developed in Houston, Los Angeles, and Paris. The Centre, a Silver Jubilee initiative, was the first such centre built in North America. At the foundation ceremony, Mawlana Hazar Imam expressed his vision for this Centre: 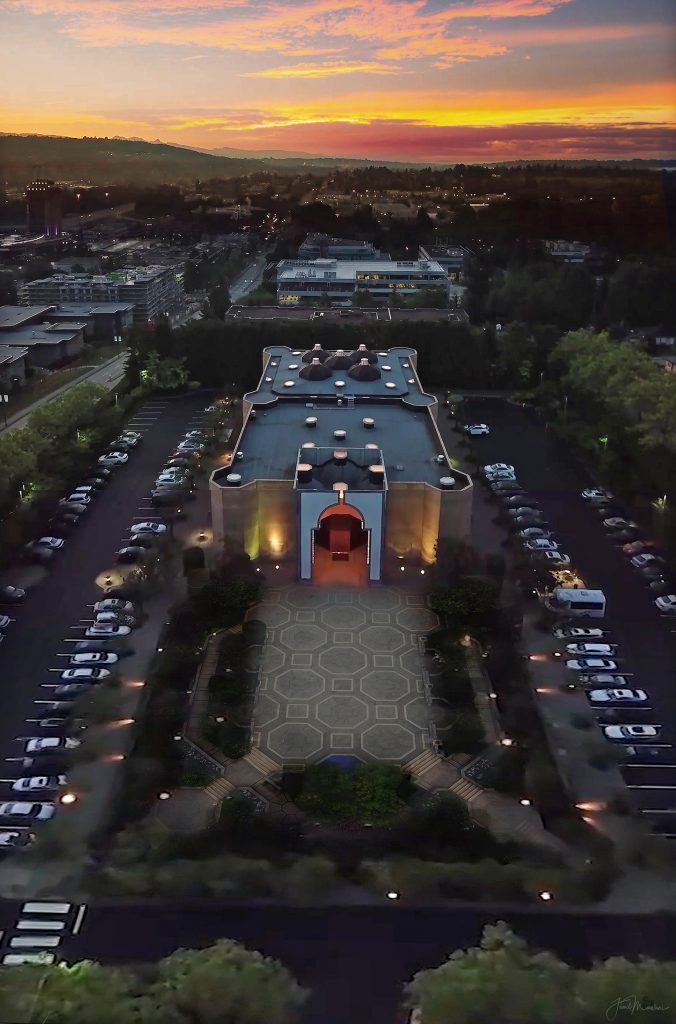 “This will be a place of congregation, of order, of peace, of prayer, of hope, of humility, and of brotherhood. From it should come forth those thoughts, those sentiments, those attitudes, which bind men together and which unite. It has been conceived and will exist in a mood of friendship, courtesy, and harmony…. it is my hope, a very deep hope, that it will become a symbol of a growing understanding in the West of the real meaning of Islam.”

“The Ismaili community has sought to create a building here which is both Islamic in its architectural inspiration and of a quality to enhance the overall distinction of Burnaby. The Jamatkhana is designed to be a social and cultural centre, as well as a place of congregation. It expresses the Ismailis’ desire to give of their best to the cultural and economic fabric of Canada. They are proud that it symbolises their commitment both to this country’s future and their ancient heritage. Nor is there any dichotomy in this dual aim. Muslims believe their faith is not for one time, but for all times and so there cannot be conflict between tradition and modernity.”

35 Years of the Ismaili Centre Vancouver

Insights from the Architect: An Inside Look at the Ismaili Centre, Vancouver with Bruno Freschi

35 YEARS OF THE ISMAILI CENTRE VANCOUVER ​

The History of the Ismaili Centre, Vancouver: A Journey Through Time

35 YEARS OF THE ISMAILI CENTRE VANCOUVER ​

Celebrating 35 Years: In Conversation with the Right Honourable Brian Mulroney

OPENING CEREMONY IN 1985 - A Reflection

25 Years of the Ismaili Centre in Burnaby, BC

Highlights from the past 25 years of the Ismaili Centre, Burnaby, featuring video footage of Mawlana Hazar Imam and Canadian Prime Minister Brian Mulroney at the Opening Ceremony of the Centre on 23 August 1985.

Events Captured by the Director

Jamil volunteers his time to capturing various events at the Ismaili Centre Vancouver, from an Afghani Concert with Sakhi, Salar Nader & Abbos Kosimov. To the 19th Prime Minister of Canada Kim Cambell & Premier of BC John Horgan, along with many other leaders such as British author Karen Armstrong, Globe and Mail John Stackhouse & UBC President Stephen Toope. From production to post-production, Jamil feels his position allows him to not only see perspectives through the eye of a lens but through the methodology in the post production.

Jamil collaborated with other artist globally from producing a Garba music video with Aly Sunderji to a Hip Hop music video with Tazneem Tarmohamed and dance with Alyssa Amershi. As well, various other events such as projection mapping at the Center for an Arts show called Dispersion and concerts with Tasmiya Productions and  Salim Sulaiman. With over 15 years of experience, Jamil is proud to serve the Ismaili community.

Third Eye Weddings presents Weddings at the Ismaili Centre Vancouver. Since 2004 Jamil Mawani has captured hundreds of weddings and events at the Ismaili Centre in Burnaby. Having the privilege to capture these moments has been a great opportunity for Jamil, and he is happy to serve his community with humility and ethics of Ismaili faith. This building holds special place in Jamil’s heart and has been his cornerstone, he looks forward to the day when he recites his vows in this sacred space. Here is a compilation of weddings captured by his company Third Eye Weddings a division of Third Eye Pro. 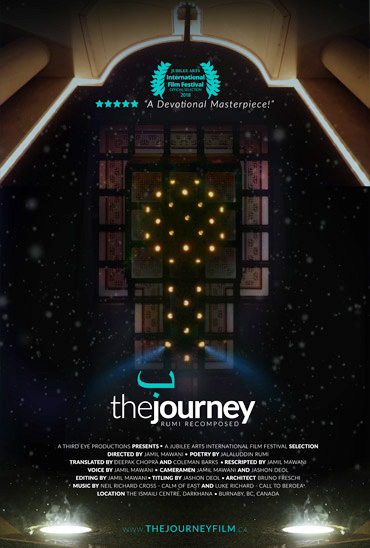 A Diamond Jubilee initiative, Jamil Mawani produced a wonderful film on the Ismaili Center in Burnaby and the poetry of Jalaluddin Rumi. Jamil and his team captured stunning cinematography through fractal filters and high speed cameras. This film not only won BC’s festival but the Nationals at the Toronto Festival representing Canada at the International Jubilee Arts Film Festival in Lisbon Portugal.

In the making of this film, the director captures never before seen drone footage, revealing a keyhole symbol shining from above the Ismaili Centre during morning prayer. Through fractal filters and high-speed cameras, one can discover the secrets hidden in the architecture and sacred geometry this film has captured leaving one mystified through unique perspectives. 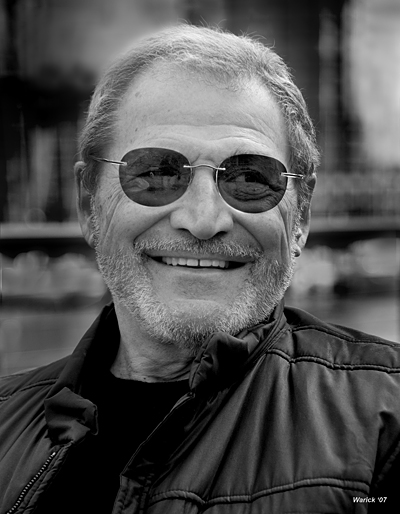 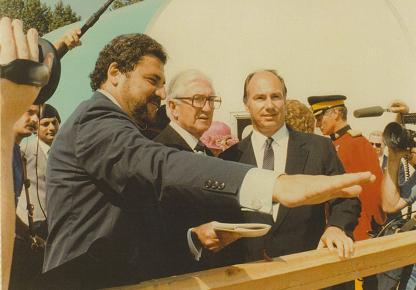 Bruno Freschi remembers the exact moment when he received the call that set him on course to design the first Ismaili Centre in North America, situated in Burnaby, a leafy suburb of Vancouver. Speaking with Nasreen Gulamhusein, he talks about the development of this iconic structure, the encouragement that he received from Mawlana Hazar Imam, and shares his reflections on the building 25 years later.  Freschi was flown to Paris to meet with Mawlana Hazar Imam and learn about his vision for the building. He discovered that in addition to being a spiritual space where the community could gather and pray, it also had to be warm and welcoming, as it would play host to communities and cultures beyond those of the Jamat. The building had to be iconic – a structure that would be relevant both when it was newly built and for decades thereafter. Finally, as the first high-profile Ismaili Centre in North America, it would mark the permanent presence of the Ismaili community in the region.

Freschi recalls his Ismaili Centre experience with great fondness because of the creative carte blanche that was given to him. “It is not often an architect is allowed that much freedom,” he admits, pointing out that disagreements about the vision and design are often major obstacles in the process. “Good design must be sustainable, efficient in handling energy – both in BTU’s [units of energy] and in this case also spiritual energy – and the Jamatkhana does this very well.”

When asked, he points out that his favourite thing about the Ismaili Centre is the quality and transition of natural light in the building. “Inside, outside, the social hall and especially in the prayer hall – the light is gradual, allowing you to discover the place slowly. The building truly becomes an icon when the light hits it.”

When the project was complete, Freschi was very pleased with the result. “Usually, buildings are full of surprises and this one was not. Everything was completed exactly as I envisioned it and intended it to be. To me, it felt 1 000 per cent perfect. That is very rare.

Right click to save image or take a screenshot from your device or desktop.

© 2020 The Journey Film. All Rights Reserved.
Website Designed & Developed by Jamil Mawani
Made with ♥ by Third Eye Pro